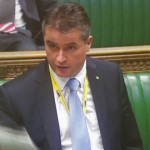 The UK Government must confirm support for island renewables as a matter of urgency, said Na h-Eileanan an Iar SNP MP Angus MacNeil.

Mr MacNeil, who is the outgoing Chair of the Energy and Climate Change Committee, has spent the last 16 months on the influential Select Committee which has held the UK Government to account over its energy policies.

As a result the EEC Committee has now been dissolved, however in a final report the Committee set out the energy policy implications of leaving the EU.

Mr MacNeil ensured that the position of island projects was highlighted prominently in the report and calls on the UK Government to provide an adequate response to the many unanswered questions including the need for a specific reassurance on a scheme which will ensure island renewable projects are eligible for a Contract for Difference (CfD) which would make projects feasible in terms of security of revenues.

The report further points out that the Committee did not receive an adequate response to their concerns and Mr MacNeil added that this was ‘immensely disappointing given the importance of the subject’.

He said: “We are urging our successors in the Business, Energy and Industrial Strategy Committee to press the Government on a number of areas including a timeline for an Emissions Reduction Plan and a response to the issues raised in the Investor Confidence report.

“The delay in confirming the position for developers in the islands is unacceptable and I hope the new Committee will ensure that this is followed up. As MP for Na h-Eileanan an Iar, where many projects are reliant on a firm commitment of support from the UK Government, I will continue to press this matter.

“When I met the Minister with responsibility for Energy, Greg Clark MP in July, he offered to come the islands to see for himself the immense potential of renewable projects, and I hope to hear that this has been arranged. I will be writing to him again to urge him to act on island renewables.”

The call for reassurance for island renewables was echoed by Niall Stewart, Chief Executive of Scottish Renewables at a Westminster reception hosted by Mr MacNeil on Wednesday night.

Mr MacNeil will now take up the role of Chair of the International Trade Committee.